This is the third (and likely last for a while) in a series of legal network posts. The first explored legal academic co-authoring relationships. The second mapped the law prof twitter network. Below you’ll find a network representing the advocacy relationships between lawyers who have argued cases at the Supreme Court.

For some years now, there has been discussion about the increasing specialization of Supreme Court advocacy. During her recent trip to Northwestern Law, I heard Justice Kagan express her appreciation for this trend. She seems to feel that specialized Supreme Court advocates tend to do a better job of arguing cases and framing issues in a manner helpful to the court.

While we can see the specialization trend quantitatively by simply looking at the names of those arguing cases at the Supreme Court and counting the repeat players, we can also see it visually by mapping the network of Supreme Court advocates. In any dispute argued at the court there are at least two types of relationships between lawyers: they are either working together arguing for the same side, or arguing against one another. These relationships can be mapped and visualized as below (click for an interactive network). 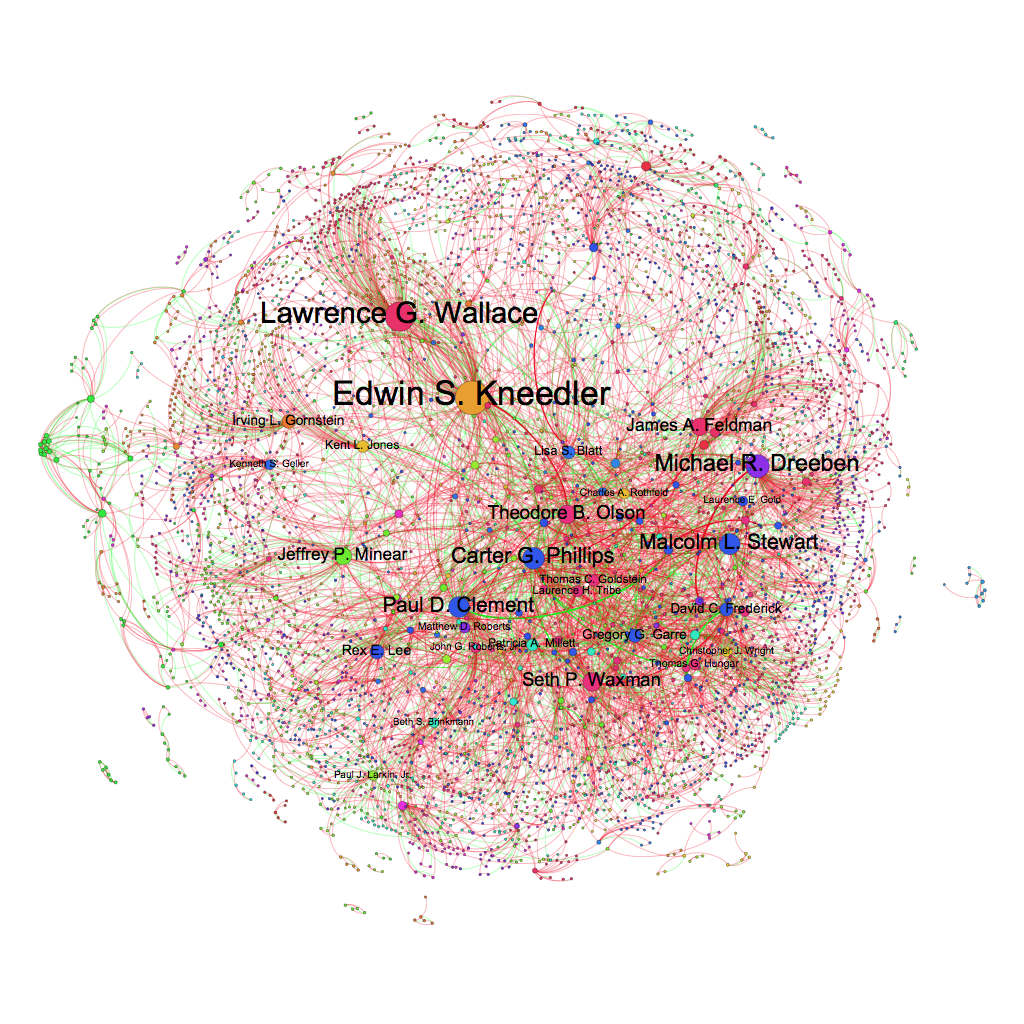 The data comes from the wonderful oyez.org. Oyez tracks who presented oral arguments for many cases at the Supreme Court. While Oyez does not have complete data, I got what I could. The processed dataset includes data on 4741 lawyers with 6034 links between them.

The network above includes two types of relationships – lawyers who worked together on the same side of a case are linked by a green edge; those who were on opposite sides of a case are linked by a red edge. I excluded cases where it was unclear which side of an issue each lawyer was on. Also, the interactive network isn’t able to represent parallel edges, so those few lawyers who have both worked together and against one another in Supreme Court arguments only have one edge between them (the more complete data is included in the other analyses below though).

In addition to simply plotting a snapshot of the network, I did some work tracking how it developed over time. What the snapshot does not show is the trend towards centralization in the network. In the last few decades there have been more-and-more repeat players at the Supreme Court. Looking at the advocacy network over time clearly shows this trend. The first graph below plots the gini coefficient for the network’s degree distribution in each year from 1985 to 2014. This demonstrates the increasing skewness of the network’s degree centrality.

Both of these graphs show a network that is clearly becoming more centralized, with a select few lawyers at the center enjoying more-and-more of the connections. Whereas in earlier eras many cases were argued by one-off pairs of lawyers or small teams of lawyers advocating against one another (see all those isolated small groups in the above network), in recent years it is increasingly common to turn to an expert Supreme Court advocate, leading them to have increased centrality in the network.

Finally, because everyone likes rankings, the table below shows the top twenty lawyers by their degree centrality. Note that this is not the same as simply ranking by the number of cases argued. When teams of lawyers argue a case, it increases the degree centrality of everyone involved in that case. Note also that there is undoubtedly some data missing because of the way I had to gather it from Oyez.

Data at Oyez is subject to a Creative Commons Attribution-NonCommercial-ShareAlike 3.0 Unported license. As such, the Supreme Court Advocacy Network data is also available with the same licensing terms. Feel free to contact me if you want raw data.